Conference Organized by the American Democracy Collaborative
Co-sponsored with the Mario Einaudi Center for International Studies
and the Center for the Study of Inequality
Nov. 7-9, 2019, Cornell University 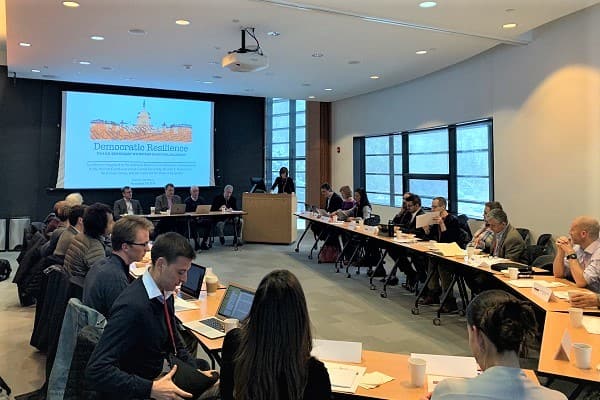 For a quarter of a century, the American political system has confronted rising political polarization. This polarization has transformed numerous aspects of government and politics, and at least by some measures, diminished government’s capacity and responsiveness to voters. It affects political institutions, putting the separation of powers under strain as conflicts align more thoroughly with partisan divisions. Many ordinary Americans themselves are also drawn into polarization, as partisan affiliation increasingly reinforces cleavages of race, ethnicity, religiosity, place (e.g. urban versus rural), and economic status.

Partisan polarization and tribalism have reached new levels under the current President, raising concerns about adherence to constitutional requirements and the flaunting of democratic norms. But the trends that endanger democracy are the not the product of a single presidency; rather, they have been on the rise for decades and they threaten to persist well beyond the current administration. The question is, Can American political institutions and civil society withstand these intensifying challenges, permitting democracy to survive?

This conference explored whether the dispersion and fragmentation of power underlying the U.S.constitutional system remains sufficient to weather the onslaught of threats the nation is confronting in the contemporary period. We also analyzed whether the American polity currently has the capacity to foster countercurrents that can reverse these trends and repair damage that may have already occurred. We are concerned not only with contemporary challenges to American democracy but also with the deeper historical currents and developmental processes that have helped produce these conditions. We also seek to gain understanding of these questions by engaging in comparative analysis, to understand if, how, and why the United States might be similar to or different from other countries where democracy has been under threat. 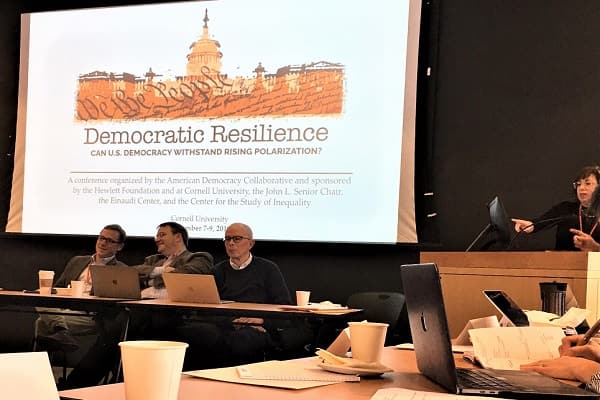 The conference was organized to address these questions and provide feedback on research papers that will eventually be published in an edited volume. The conference began with an overview of rising political polarization, then followed by examining growing social and political polarization among ordinary citizens, how this can be mobilized by different organizations, and how it may be influencing partisanship. We also examined how these trends might be affecting the separation of powers and specific governing institutions. We concluded with an assessment of procedures and developments that could reinvigorate or protect democracy. In each case, scholars of comparative politics who have studied democratic deterioration around the world served as discussants.