A group of Cornell undergrads celebrated earlier this month after they learned that an incarcerated man they had been collaborating with was given parole after 28 years in prison. Another group of students, whose applicant’s parole was denied, is signing on to work alongside him again when he can re-apply – two years from now.

The students, part of a new Cornell chapter of the Parole Preparation Project, help incarcerated people compile parole “packets” and prepare for interviews with their parole boards. The packets contain court records and files from the corrections department, but they can also include letters of support and statements from the incarcerated person about their remorse, their plans post-release, their history and how they came to be where they are.

“The parole project shows us once again what Cornell students can do, even in the middle of a global pandemic,” said Joe Margulies, professor of government and law, who was an advisor for the students. “They helped secure a man's liberty, which is one of the greatest accomplishments anyone can achieve.”

The Parole Preparation Project, founded in 2013 in New York City, supports incarcerated people with life sentences both before and after their release and advocates for changes to the parole process. Most volunteers with the project are attorneys or law students.  When Ithaca resident Richard Rivera heard that so many Cornell students were interested in criminal justice issues, he contacted the project’s director and encouraged her to allow Cornell undergrads to work on cases. Then, he met Anna Lifsec ’21, who was already involved in prison education and advocacy projects at Cornell, and suggested the idea to her.

“It’s logistically difficult to put together this packet when you’re in prison,” said Lifsec, one of three students who worked on the sucessful case.  Between printing and mailing costs and legal fees, often an incarcerated person isn’t able to gather much for their parole hearing other than data from the criminal justice system.

Lifsec has been interested in mass incarceration issues since high school and became more so when she worked on a research survey with a Cornell professor that showed that half of the U.S. population has an immediate family member who has spent time in jail or prison.

Lifsec and fellow students took on two cases in the spring, speaking with the incarcerated men and their families by phone and helping to compile the packets. The students received a grant from Engaged Cornell to help cover their costs.

Lifsec said more than 500 people have applied for help from the Parole Preparation Project, which prioritizes people who are older or have health problems, or who have already served many years in prison.

Four other Cornell students also worked to help another incarcerated man, who was denied parole: Louise Wang ‘23, Rose Crawford ‘22, Sara Rogers and Julianna Gay ‘22. They will continue to work with him to prepare for his next hearing, in two years.

Lifsec just accepted 12 more students into the parole prep program and they’re beginning to work with six new people who are incarcerated.

“This is all about being able to accept that someone can change and become a different person,” Lifsec said. 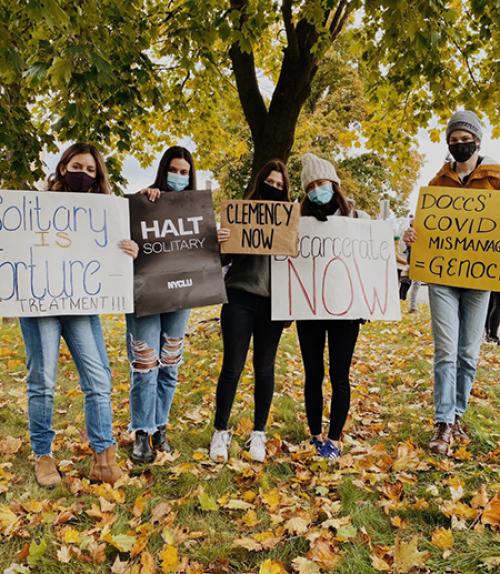