As part of a Cornell Institute of Politics and Global Affairs webinar in March 2021, former President Bill Clinton spoke about the state of democracy, noting that the U.S. was at a “fairly perilous point in our democratic journey—we’re in a dogfight.”

“We’ve always been divided, and we’ll always have differences of opinion,” Clinton said. “But we need to find a way to get enough of each other together to work together.”

The event—at which Clinton took questions submitted by an online audience and stayed on to hear a panel of Cornell faculty experts discuss the challenges of inclusive politics—was part of the institute’s ambitious first two years of programming. 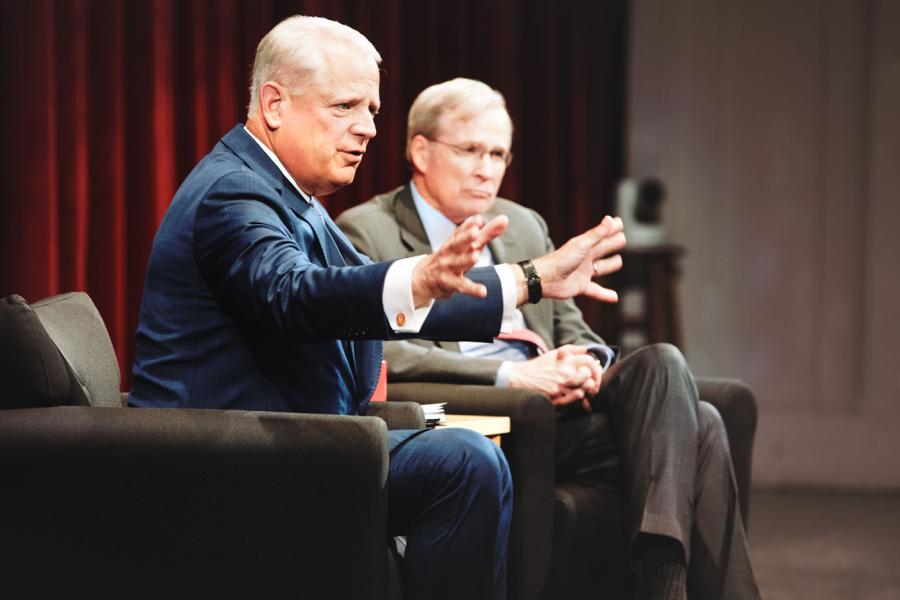 Launched in 2019 before the COVID-19 pandemic began, the institute (known as IOPGA for short) aims to help develop and nurture the next generation of public servants. It offers programs—which are free and open to all—that delve deeply into complex issues and events, stress bipartisanship, and raise understanding of domestic and international affairs.

In addition to supporting an undergraduate scholars program, it has hosted dozens of discussions with current and former politicians and policymakers and brought Congresspeople from both sides of the aisle together to work on crisis simulations and cybersecurity.

“Our sweet spot is giving members of Congress, policymakers, and the Cornell community an opportunity to deepen discourse, raise understanding, and find common ground in an exceedingly polarized and tribalized environment,” says IOPGA’s director, Steve Israel, who served as a Democratic U.S. Representative from New York from 2001–17 and calls the institute “an oasis of bipartisanship and common ground.”

While IOPGA is based in New York City, it maintains deep connections to both Washington, D.C., and the Ithaca campus. Events typically draw an average of 700–1,200 participants, and more than 60 programs—virtual, in-person, and hybrid—have been held so far. (Most are archived and can be viewed online.)

“We’re definitely punching above our weight,” Israel says, noting that not only has IOPGA met its initial charge of bringing bipartisan global and national policy leaders to interact and engage with the Cornell community, but has exceeded it—drawing such dignitaries as Clinton; House Speaker Nancy Pelosi; numerous members of the House and the Senate; Reince Priebus, who served as chief of staff to former President Donald Trump; and a variety of diplomats, journalists, and authors. 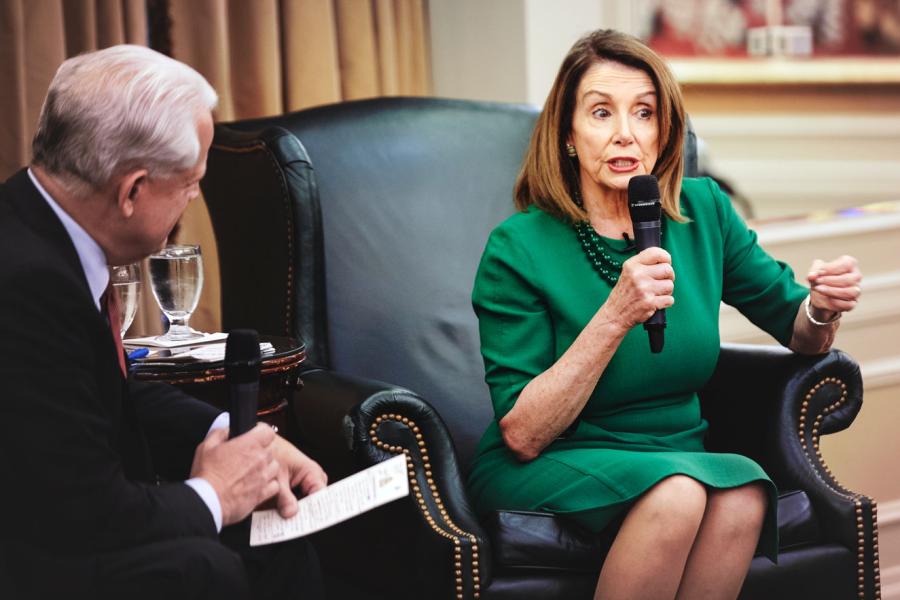 House Speaker Nancy Pelosi at an event at the Cornell Club–New York City in May 2019.

Pivoting to virtual programming during the pandemic helped raise the institute’s profile and reach, Israel says, noting its robust series of online and hybrid conferences. IOPGA has also formally joined Cornell’s Brooks School of Public Policy, which opened last fall; Israel calls it a “natural home for us.”

In 2021 alone, IOPGA held its bipartisan Congressional Peace Games in Washington, D.C., bringing together members of Congress to work on crisis simulations; launched the Campaign for the Future of Democracy, dedicated to strengthening democratic norms and resilience through counter-messaging against malevolent partisan actors, social media algorithms, and disinformation campaigns; released the second edition of its Bipartisan Policy Review, published biannually, which features pieces co-authored by Republicans and Democrats; and continued its undergraduate scholars program, which comprises students from diverse majors who are interested in public policy and service.

The institute is also continuing to reach out to Big Red alumni—a robust and diverse and global population, Israel notes—to boost awareness of its programming.

Upcoming events include a discussion of global challenges with Georgette Bennett, founder of the Tanenbaum Center for Interreligious Understanding (January 26); a talk about the state of American politics with journalist Bret Stephens (February 2); and a discussion with Farid Ferdows ’21, a former Afghan interpreter for the U.S. Army (March 9).

Voices from across the political spectrum

During the institute’s “Inside Congress” series in October 2019, U.S. Representative Adam Schiff described the challenges of what he called the ongoing struggle “between democracy and representative government, and dictatorship and autocracy,” calling it “the seminal ideological challenge of our time.”

In February 2021, former Ohio Governor John Kasich discussed bipartisanship and the need for local solutions to societal challenges. “When we work to attack a common problem, we get together and meld our differences,” he said. “We need to reflect on things that historically have brought our country together.”

Other guests have included former Speaker of the House Newt Gingrich, former U.S. Representative Peter King, and the co-chairs of the House Problem Solvers Caucus. (The latter spoke as part of an online panel just a week after the January 6, 2021 assault on the Capitol.)

Conversations with policymakers and experts have explored voting rights, the federal debt ceiling, the pandemic response, big money in politics, and race and justice in the U.S.

While there are many institutes of politics across the country, some connected with major universities, Israel says that the IOPGA’s innovative programming, immersive activities, and agility—sometimes producing content within days of a seminal political event, such as the panel following the Capitol assault—distinguishes Cornell’s, as does its NYC metro area location. 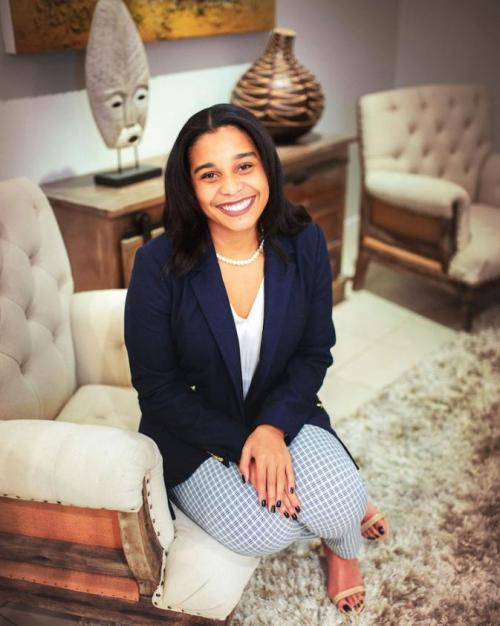 The institute also prioritizes teaching and mentoring students and bringing them along into careers in public policy. “One of the platforms we provide is this intense interaction between journalists and political operatives, campaign experts, and students to help shape their careers and then place them in jobs,” Israel says.

One of those students is Anuli Ononye ’22, who also is the current Student Assembly president. She became the institute’s first intern in March 2020 and also got an internship at the D.C.-based publication The Hill that summer.

She mostly works on IOPGA’s weekly newsletter, but has also immersed herself in the issues. “In college, sometimes I’m in a bit of a liberal echo chamber,” she says. “The institute encourages me to branch out and have some of those further conversations with others from different political backgrounds, which has been really positive for me.”

Government professor Doug Kriner, IOPGA’s faculty director, maintains related programming on the Ithaca campus, where faculty use their research and expertise to speak to some of the same questions the institute tackles, thereby strengthening the institute’s connections to policy development work happening on the Hill.

Above all, keeping a broader historical perspective in mind is key to long-term progress, Kriner says. “We have been intensely polarized, but in multiple periods throughout American history, polarization has ebbed and flowed,” he says. “To think that we are on a linear irrevocable path that will never ever change is wrong.”

IOPGA events, he notes, have brought together students from across the political divide—promoting discussions that are civil, engaged, and fact-based. Says Kriner: “That’s so critical in a university where free speech, freedom of expression, an exchange of ideas, and questioning our own prior assumptions is such an important part of our mission.”

How to transform neighborhoods without destroying them

‘Saber rattling’ over Ukraine highlights the region’s complicated past