Tensions between political sides had been rising for years. The president signed laws to keep out immigrants from so-called “hostile” nations and to prosecute those who criticized his administration. Party divisions spilled into everyday life, leading to fights and violence.

The reference is not, as a reader in today’s America might think, to the present day. It was 1798, and President John Adams had just signed the Alien and Sedition Acts. The young nation faced the possibility that states would secede, aristocrats would take power, and the democracy, operating under a Constitution not yet a decade old, would collapse.

“Watching the growing chaos and division, Americans of all stripes worried that their experiment in self-government might not survive the decade,” writes Suzanne Mettler, the John L. Senior Professor of American Institutions in the Department of Government, College of Arts and Sciences, with co-author Robert C. Lieberman, a professor in the Department of Political Science at Johns Hopkins University, in their new book, “Four Threats: The Recurring Crises of American Democracy.”

In “Four Threats,” Mettler and Lieberman not only assert that history repeats itself – they also identify the underlying causes of democracy destabilization. American democracy has often been fragile, they argue, and today it faces an unprecedented crisis.

Each of these threats by itself can damage democracy, “Four Threats” asserts via several examples:
•    In the 1790s, political polarization emerged quickly and led to escalating conflict as epitomized by the Whiskey Rebellion, Alien and Sedition Acts, and fear of violence surrounding the deadlocked election of 1800.
•    In the 1850s, divisions over slavery and questions of who belongs in the political community torethe country apart, leading to the Civil War in the next decade.
•    In the 1890s, economic inequality combined with polarization and conflict over who belongs in the democracy led to the disenfranchisement of millions of African American men, followed by the establishment of formal segregation.
•    In the 1930s, during the Great Depression, executive power expanded.
•    In the 1970s, President Richard Nixon’s abuse of executive power led to his resignation and a crisis of confidence in the presidency.

As a result, the authors write, American democracy is in crisis.

“It is this unprecedented confluence of all four threats – more than the rise to power of any particular leader – that lies behind the contemporary crisis of American democracy,” they write. “The threats have grown deeply entrenched, and they will likely persist and wreak havoc for some time to come.”

Amid widespread pessimism, the authors suggest a way forward.

First, we can learn from history. “Four Threats” details past crises not only to illustrate how democracy goes wrong, but also to identify factors that help democracy to thrive. From the same episodes of the past, we can learn that democracy works well in a society that is less polarized, more inclusive and where people in power are held accountable.

Second, we can filter candidates and policies by how well they will support democracy, making that the top priority, more important than their ideological alignment, material considerations and party affiliations.

And third, we should remember that democracy is a work in progress and can change course. During one of the lowest points of American democracy – the Civil War – President Abraham Lincoln’s Gettysburg Address called democracy an “unfinished work.”

Mettler and Lieberman call on Americans to continue this work in progress. “With the spirit of magnanimity and shared citizenship invoked by Lincoln,” they write, “let us carry on the work to strengthen and revitalize democracy.” 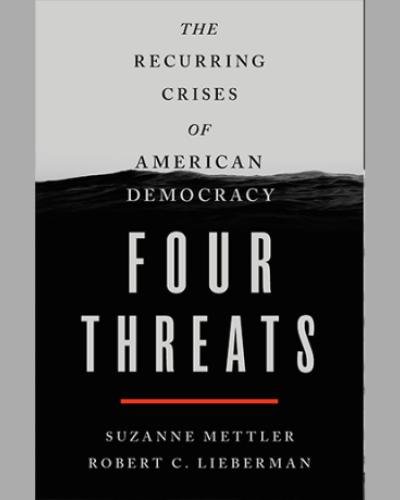