Fernando Santiago ’86 never had the chance to focus on academics in high school. He managed a pizza restaurant 28 hours per week to make ends meet.

At Cornell, all that changed.

“I’ll forever be indebted to Cornell and the kindness and goodwill of its donors who, decades and even centuries before, decided to provide a world-class education to students regardless of their financial ability to pay,” Santiago said. He was the first person in his family to go to college and majored in government in the College of Arts and Sciences.

Now a lawyer, Santiago has paid that kindness forward. He volunteers in leadership positions at several Rochester-area nonprofits that improve the lives of people in need of food, housing, training and other support.

In recognition of his service, Santiago received the Cornell New York State Hometown Alumni Award on June 22, at a ceremony at the Genesee Valley Club in Rochester. The award recognizes New York state natives who return to their hometowns after graduation and make a positive impact on their local communities. Santiago grew up in Spencerport, New York, a few miles west of Rochester.

“I think we understand the world better and find our own humanity when we help others,” Santiago said prior to the event. “The truth is, I merely provide occasional advice and counsel to individuals who do the hard work on a daily basis of making our communities better. I’m constantly inspired and awed by the leadership teams of the organizations I have the privilege to serve. It takes a community to have a community. I’m just a very, very small part of that.”

“Bright, bold and curious young men and women from all over New York state – people like Fernando – come to Cornell for an education and then carry newfound insight, new knowledge and a commitment to service back to their home communities,” said Joel M. Malina, Cornell vice president for university relations, who presented the award. “We’re proud of Fernando and the more than 67,000 Cornell alumni living in New York state today.”

At Foodlink, Santiago has helped oversee three physical relocations of the organization, two capital campaigns, revenue growth of 320%, succession planning and the implementation and growth of more than two dozen food related programs, said Julia Tedesco, Foodlink’s president and CEO. “To have someone like Fernando and [his wife] Arline show care, respect and support for us as young leaders went a long way and continues to go a long way in empowering us and enabling us to lead an organization that we care for,” she said. “I’d argue that his presence and influence is as valuable, if not more, than any monetary donation or days of volunteering, and Fernando has done all of the above.”

After graduating from Cornell, Santiago earned a law degree at the University of Pennsylvania Law School. He and his wife, Arline Bayo Santiago, both began their careers as lawyers at large Philadelphia law firms and returned to the Rochester area after starting their family. Fernando Santiago co-founded Santiago Burger LLP, focusing his practice on litigation in New York state and federal courts. He has published a number of articles on law and lectured in a variety of areas including insurance law, and design-build and construction law. Santiago has been listed by the Best Lawyers in America organization and was recognized as one of Rochester’s “40 Under 40.”

Also attending the event was Bob Attardo ’88, board president of the Cornell Club of Rochester, who nominated Santiago for the award; Bayo Santiago; and daughters Alina Santiago ’20, M.P.A. ’22, and Claire Santiago ’17.

Cornell’s Division of University Relations created the award in 2018 in collaboration with Alumni Affairs and Development. Santiago is the ninth recipient. 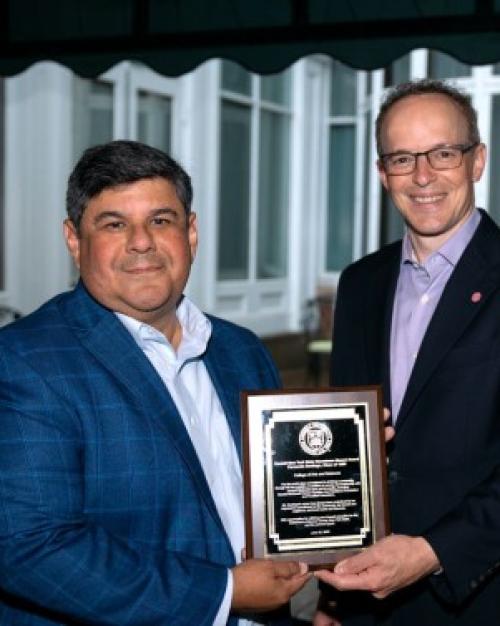