Sgt. Scott Grantz ’99 Serves His Alma Mater on the CUPD

Scott Grantz ’99 spends the vast majority of his time working with people—but two of his most memorable cases involved fiberglass cows.

Now a sergeant with the Cornell University Police Department (CUPD), Grantz was a patrol officer when he responded to an early morning call in 2003: Cornellia—the 150-pound bovine mascot that had been stolen from her perch atop Stocking Hall’s Dairy Bar—had been found in a paddock at the Vet college, grazing among the live cows.

And in 2006, after Cornellia had again been cow-napped (this time along with her baby, Cal), Grantz thought he’d cracked the case when he pulled over a car with a plastic calf tied to its roof.

“[The driver] was actually here for a trade show, and that was one of the props for his display,” Grantz recalls. “I explained to him that somebody had taken the other cows, and he even offered to donate his to the University.”

Currently the only alum serving as a sworn officer in the 45-member department, Grantz is a local native who attended Ithaca High School before majoring in government on the Hill.

With an interest in combining law, public service, and policing, Grantz attended the Southern Tier Law Enforcement Academy and joined CUPD as a patrol officer in 2002; he was promoted to sergeant four years later.

“We interact with people, usually on their worst days—it’s a great opportunity to have an impact,” Grantz says of working in law enforcement. “We get a chance to make it at least manageable for them, and to try to get them the resources that they need.”

As an alum joining CUPD, Grantz had an inherent advantage over other new officers: he knew the campus, could easily connect with students, and understood much about how the sprawling, decentralized University worked.

Early on, he was an avid member of the bike patrol. “I biked all the time, even when, because of the weather, it was probably not a good idea,” he says with a laugh. “But it’s a great way to interact with the community.”

In 2008, he left CUPD to join Cornell’s Office of the Judicial Administrator (now the Office of Student Conduct and Community Standards), helping to investigate and adjudicate alleged violations of the Campus Code of Conduct.

“It was an interesting fit for me,” he says. “It was a little bit more legalistic, and I got to see what happens after CUPD makes referrals, working on that side of things.”

But he opted to rejoin the department after a few years, even though it meant starting over as a patrol officer. “Honestly, I missed police work,” he says. “I missed emergency services.”

His time away had been instructive, though: he returned with a more nuanced understanding of the system of which CUPD is a key part.

“It’s not all about the police work; that’s actually a small percentage of what we do,” observes David Honan, formerly CUPD chief and now head of the newly formed Division of Public Safety. “It is about making sure our students are taken care of. Scott brought back even more information and experience to help us make sure we’re connecting students to the right places.”

Grantz was again promoted to sergeant in 2016, this time heading up the department’s investigations unit. He now supervises four investigators and coordinates with other agencies and entities, both on campus and in the wider community.

Over the years, his CUPD duties have occasionally included liaising with the U.S. Secret Service on security for visiting dignitaries, including former President Bill Clinton (who gave the Convocation address in 2004) and current President Joe Biden (who did the same, as a former vice president, in 2017).

Says Grantz: “I’ve learned that no matter how well planned those visits are, we need to be prepared to adjust the plan, whether someone wants another scoop of ice cream”—Biden is famously fond of the frozen treat—“or needs a cup of coffee at an inopportune moment.”

On the personal side, Grantz is married to a classmate, Deanna Sharpsteen Grantz ’99. (They didn’t meet on campus, but rather while both working at Ithaca’s Cass Park during a high school summer.)

They’re now raising five daughters in a restored farmhouse located between Ithaca and Auburn. “We homeschool them,” he says, “so it’s a very busy household.”

Law enforcement in the spotlight

With calls for police reform a key part of the national conversation in recent years, Cornell’s Division of Public Safety was created following a long process—which included input from an advisory committee—in response to President Pollack’s call to reimagine the University’s approach.

In addition to CUPD, the new division comprises other campus entities, including the University’s 911 center and compliance offices; Honan also holds the newly created position of associate vice president for public safety.

In line with evolving understanding of the challenges faced by officers and the communities they serve, CUPD’s training has expanded to include hands-on scenarios on mental health issues, de-escalation techniques, and adapting to quickly changing circumstances, among other topics.

And Grantz notes that CUPD has long embodied the kinds of positive attributes embraced by the reform movement, including an emphasis on community wellbeing and a willingness to have open conversations about difficult issues.

“Our focus on customer service, on doing anything and everything we can for people—even if it’s not a traditional law enforcement function—has always been ingrained,” he says. “We have always prioritized the need and ability to communicate with people, to use our verbal skills effectively, versus using force or intimidation.”

He continues: “We’re here to serve the community, not necessarily to police it. Sometimes that includes enforcement actions, sometimes it doesn’t. And even if it’s not really a law enforcement function, we like to be part of the discussions, to help steer people the right way.”

“Our focus on customer service, on doing anything and everything we can for people—even if it’s not a traditional law enforcement function—has always been ingrained,” he says. “We have always prioritized the need and ability to communicate with people, to use our verbal skills effectively, versus using force or intimidation.”

He continues: “We’re here to serve the community, not necessarily to police it. Sometimes that includes enforcement actions, sometimes it doesn’t. And even if it’s not really a law enforcement function, we like to be part of the discussions, to help steer people the right way.” 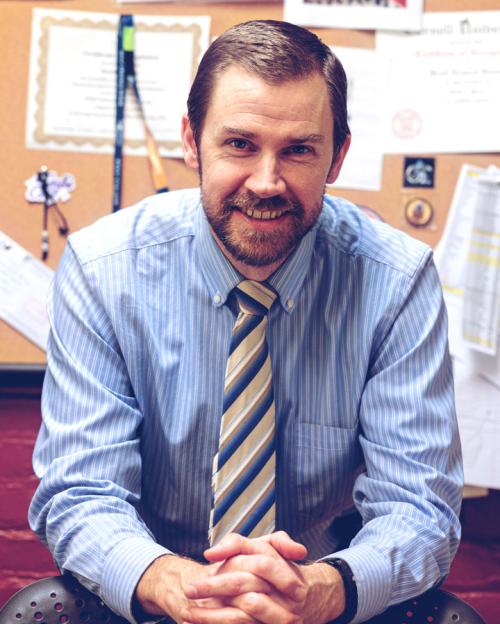