Cornell soccer player Jadyn Matthews ’22 co-founded Women of Color Athletics (WOCA) in February 2020 to provide female athletes of color at Cornell with a community of women who understand the challenges they face. Then the pandemic hit. Then George Floyd was killed. That summer, Breonna Taylor’s murder went uncharged.

“It was a breaking point,” Matthews said. “It felt like WOCA needed to happen when it did. I get emotional about it because it just turned out to be way more important and bigger than I ever expected.”

Originally, Matthews, a biology and society major in the College of Arts and Sciences (A&S), wanted to start WOCA because of the loneliness she’d felt being one of only three or four athletes of color on her soccer team. She’d played for the Jamaica Women’s National Team, comprised of all women of color, and her experience as a minority was starkly different.

“When you’re in the minority, you’re expected to sort of assimilate to the dominant culture, the music, the way of dressing,” she said. “But that isn’t always reciprocated, and it was difficult to find your group of friends or support network. As an athlete, all your time is spent playing soccer or whatever sport you’re doing, so you don’t have time to branch out to other organizations or clubs where you can meet other people who look like you.”

A new generation of leaders

Matthews formed WOCA with other athletes from a range of sports and majors: Monique Anderson ’22 (track and field athlete and biological sciences major in A&S), Theresa Grace Mbafeno ’22 (basketball player and industrial labor relations major in the ILR School), and Madison Baptiste ’22 (volleyball player and government major in A&S).

Now with the next generation of leadership, a seven-member executive board organizes biweekly meetings and plans weekend trips for a community of 20 to 30 women. The meetings often have a theme – a prompt about students’ backgrounds or experiences at Cornell, workshops on professional development, networking, and career prep – or an activity, like making candles or friendship bracelets, that alleviates stress. The group also makes a point to support each other at games and competitions.

WOCA also works with the Cornell Athletics administrators to voice their concerns and provide a channel for activism and advocacy. When nationwide protests broke out in summer 2020, WOCA organized a social media campaign, “Here Us Now,” where Black student-athletes voiced their frustration at being narrowly seen or appreciated only for their athletic abilities. The group then worked with administrators to organize “Our March, Our Campus” in fall 2020, a protest march and show of solidarity against racial injustice; nearly 300 students and more than 40 athletics staff participated.

“There was a need for WOCA before all of that civil unrest,” said WOCA president Sydney Waiters ’23, soccer player and psychology major in A&S. “But we really needed WOCA at that point in our lives, and I think it really pushed us to get the group together to act.”

“They made an immediate impact, and the impact continues,” said Amy Foster, senior associate director of athletics for compliance and student services and co-adviser for WOCA. “The march was a tremendous effort to organize and raise their voices, despite campus COVID restrictions, in a way that was safe and complied with university guidelines. The founders are an incredible group of leaders, and we’re seeing now, with a new group, just how strong and important that mentorship and community has been.”

WOCA members have also visited with girls of color at a local elementary school; advocated for the formation of the Black Student-Athlete Committee, a group that advises the administration on Black athletes’ needs; and met with recruits from underrepresented groups to increase diversity in Cornell athletics.

For newer members, WOCA is a source of friendship and support – and fun. Track and field athlete Tia Taylor ’25 was hesitant to make the time commitment as a freshman; the meetings are in the evenings to accommodate athletes’ varied schedules, and she had to rush from her weightlifting session to get to the dining hall before it closed.

“But after my friends and I finally went to our first meeting, we were like, ‘We’ll find dinner a different way.’ This is an experience you don’t want to miss,” she said. “When I go to WOCA, I try to forget about everything else and be present. I love the sessions where we’re either doing hands-on activities like making candles or just hanging out. But deeper sessions help me learn more about myself, my worth, my work ethic and how to deal with classes, and also being more open to myself – making sure I’m taking the breaks I need and that I’m communicating with myself about what’s best for me as a student-athlete.”

“We’re just enjoying each other,” said volleyball player Megan Bickel ’25. “And you know if you do have a challenge, WOCA is a place where you can work through it.”

Cornell Athletics’ support of WOCA aligns with other efforts to make the department more inclusive. The department recently hired Devan Carrington, associate director of athletics for student support, development and inclusion, to incorporate consistent messaging, education and programming around diversity, equity, and inclusion (DEI), and belonging and justice. The department has also collaborated with fellow Ivies in the 8 Against Hate campaign and other initiatives; supported minority student-athletes’ attendance at leadership conferences; formed a committee of staff and coaches to increase partnership with DEI resources on campus; increased awareness of the university reporting system for instances of racial bias; and added a DEI position to the Student-Athlete Advisory Committee, which provides administration with student-athletes’ perspectives through team representatives.

“Athletes can have an extra influence on advocacy because of the attention we get for our sports, and the opportunity to interact with our administration, to talk to them and share our needs,” said Sydney Moore ’24, volleyball player, psychology major (A&S) and vice president of WOCA. “We want to provide resources for upcoming athletes and hope that recruits can get excited about us – we really want to see more women of color becoming student-athletes at Cornell.”

Matthews hopes she and others in WOCA, current members and alumni, can spread the model to other schools and eventually make it a national program.

“I can’t imagine not having the support of the girls in WOCA – it really does make your whole experience change,” Matthews said. “You don’t feel alone anymore. You don’t feel like what you’re doing isn’t good enough. You have someone to talk to and friends who understand.” 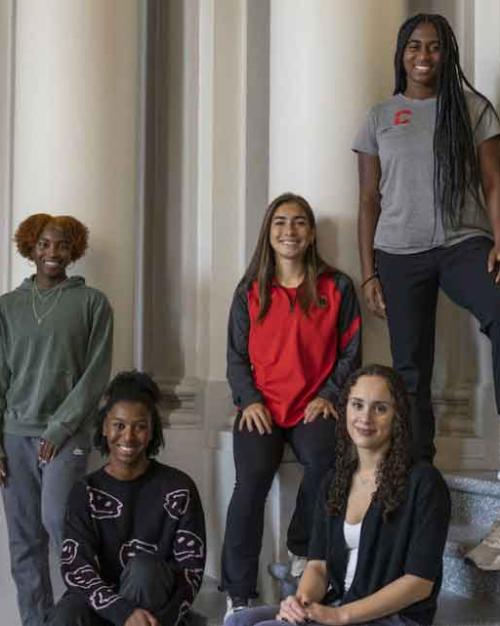