In this time of increasing political polarization, the participation of scientists in political advocacy has become yet another flashpoint, with some critics accusing scientists of being self-serving if they advocate for increased science funding.

A new study offers empirical evidence demonstrating that scientists who have received federal science funding are no more likely to engage in political behaviors – whether science or non-science related – than are those who don’t receive funding. The study, “Scientists’ political behaviors are not driven by individual-level government benefits,” published May 6 in PLOS One, was led by incoming inaugural Klarman Fellow Baobao Zhang, currently at Yale University, and Matto Mildenberger, University of California Santa Barbara.

“We find that scientists’ preferences for political advocacy are not shaped by receiving government benefits. Government funding did not impact scientists’ support of the 2017 March for Science nor did it shape the likelihood that scientists donated to either Republican or Democratic political groups,” write the researchers. “Our results offer empirical evidence that scientists’ political behaviors are not motivated by self-serving financial agendas. They also highlight the limited capacity of even generous government support programs to increase civic participation by their beneficiaries.”

The researchers looked at 2,119 participants in the National Science Foundation Graduate Research Fellowship (NSF-GRF) Program, including 408 that they surveyed, analyzing whether scientists who benefited from the fellowships increased their civic engagement. They found no greater likelihood of voting, making political donations, or participating in the March for Science from those who received fellowships compared to those who did not.

One explanation for the findings, said Zhang, might be that scientists are already highly engaged politically. “Nearly all who are eligible are registered to vote, and both winners and non-winners of fellowships endorse the March for Science and support increased government funding for science,” she said. 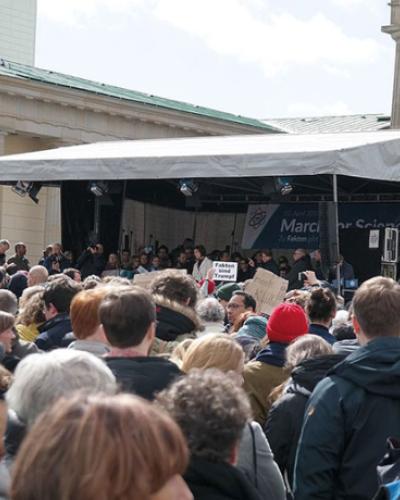