When the Los Angeles Times wanted to determine whether people still believed in the American dream, they turned to a pair of Cornell researchers with a deep background in public opinion surveys to do the work. When an advocacy organization wanted to know whether Black parents felt comfortable sending their children back to school during the pandemic, they sought out the team as well.

Ben Leff ’16 and Professor Peter Enns are the cofounders of Reality Check Insights, a company that delivers data insights related to people’s attitudes, preferences and behaviors to media organizations, political groups, researchers and companies. Reality Check has built a targeting technology that uses a variety of engagement strategies and artificial Intelligence to connect with hard-to-reach populations.

The founders first met in 2013 when Leff was a freshman in Enns’ class on public opinion and representation. Leff took another class with Enns his junior year, tapped Enns as his thesis advisor and kept in touch after graduation.

The company launched in 2020 and is in the process of raising a seed round.

“For me, this was an exciting way to continue pursuing innovations in data collection and analytics,” said Enns, a professor of government who is also executive director of the Roper Center for Public Opinion Research at Cornell, an archive of public opinion data collected from 1935 to today around the world.

Leff said he’s always been interested in politics, but became intrigued with data science, polling and surveys during his junior year, when Enns assigned his class, co-taught with Jonathon Schuldt, to visit Cornell’s Survey Research Institute and call voters to ask about their political beliefs.

“We would spend hours there and only get one to two people to talk with us,” Leff said. “The experience highlighted how antiquated methods were of contacting people.”

After receiving his MBA at Stanford, Leff decided he wanted to start a company that would utilize advanced analytics to obtain accurate results efficiently. Reality Check Insights reaches out to people using a variety of methods including direct mail, emails, text messages and social media campaigns. They also maintain a community of “Reality Checkers,” people who have taken past surveys and agree to be contacted for future ones.

The company uses artificial intelligence to determine what type of engagement works best for each intended audience, Enns said. They were surprised to find, for instance, that rural voters were more likely to respond to an online survey than a mailed request.

“We want to engage people with the way they’d like to share their views,” Leff said, adding that they use various techniques to make the experience fun, interesting and potentially rewarding for the survey taker. Reality Checkers, for instance, can earn gift cards or money for taking a few different surveys.

Most people are surprisingly happy to offer their opinions, Enns said, as long as it’s done in an efficient way and asks about something they care about. “They want to know that you’re really listening to what they have to say,” he said.

The need for public opinion data is only growing, Enns and Leff said, as companies and organizations realize the myriad ways that accurate data can save them money and time and ensure they provide the most useful products and experiences to their customers.

“There’s a growing appetite to leverage data to keep up with rapidly changing voter and consumer preferences,” Leff said.

Along with the LA Times partnership, the company has worked with private equity firms, consumer businesses, and academic researchers.

Their current team consists of Leff, the CEO; Enns, chief data scientist; and a group of three data scientists and survey experts, around the country.

As a social scientist starting a business at Cornell, Enns said he learned about entrepreneurial resources at Cornell mainly from talks with other faculty entrepreneurs, many in engineering and computer science.

“The surprising thing about starting a company is how much it feels like a continuation of my research,” Enns said. “If we reach out to someone who might be a potential client, we want to learn from them. If it turns into a partnership, great. If not, we’ve had an engaging conversation.”

To join the Reality Checker community, visit this website. 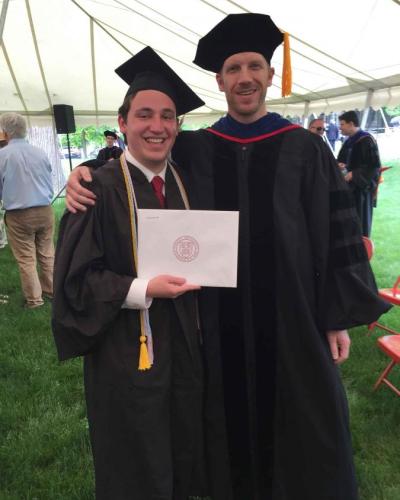