When he learned he’d been admitted to Cornell, David Hernandez ’23 had recently left a more than eight-year career in the Marines during which he’d deployed to the Middle East, led security at U.S. embassies and served as an advocate for victims of sexual assault. Some enlisted friends and superiors had questioned his decision to apply to colleges, especially selective ones.

An unsolicited call from Philip Kay ’23, a veteran outreach peer counselor at Cornell, helped convince Hernandez not only that he’d made the right choice, but that he’d feel welcomed in Ithaca. Over two hours they talked about life on campus and in town, and about their common infantry backgrounds and Jewish faith.

“It felt more personal, like there was a community here waiting for me,” recalled Hernandez, a student in the ILR School. “In the military community, many of us have a lot of shared experiences, so you understand each other in sort of a deep way.”

Hernandez and Kay are among more than 90 undergraduate veterans now at Cornell, a number that has nearly quadrupled over the past five years thanks in part to proactive peer outreach by student veterans. It’s part of a broader effort to increase support for veterans – from prospective applicants to current students – that has put the university’s goal of enrolling at least 100 undergraduate veterans within reach.

“These students have served their country, many of them in combat, and they’re underrepresented at highly selective institutions,” said Kyle Downey, a former Army reservist who leads undergraduate admissions for veteran and transfer students. “We want to make sure veterans are a critical mass within our student population, and that we fully support them throughout the process, all the way to graduation and beyond.”

An increased emphasis on peer counseling also is credited with growing Cornell’s undergraduate veteran community, which includes students across a range of ages, some with families, whose needs and interests vary widely.

“We’re trying to make it a more personalized and personable process,” said Mary Fisk, student veterans adviser and program manager and a retired first sergeant in the Marines. “Veterans really want to talk to other student veterans.”

Four years ago, a single student intern supported veteran outreach. Downey and Fisk have since assembled a team of eight peer counselors – including both Hernandez and Kay – with funding support from the U.S. Department of Veterans Affairs.

The counselors contact active-duty service members or veterans who have expressed interest in Cornell, who have applied or who have been admitted, connecting by email, phone and during visits to military bases and education conferences that are now resuming in person. They answer questions about application timelines and procedures, academic programs, housing, benefits and financial aid, while sharing their own experiences and offering encouragement.

Peer counselors often help address myths common among veterans, most of whom are transfer students, that they couldn’t get into or afford Cornell. Many veterans find tuition and living expenses are substantially or fully covered by the federal the GI Bill and Yellow Ribbon Program or Cornell’s need-based financial aid.

That was true for Joseph Dionne ’24, who once thought highly selective schools weren’t for people like him, who worked and enlisted after high school. During four years as a sonar technician on a Navy destroyer in the Pacific, Dionne’s interactions with peers in the military and at Cornell shifted his perspective.

“I started to feel that it was not only possible, but it had been done before, like I wasn’t the first person to walk this trail,” said Dionne, a government major in the College of Arts and Sciences (A&S). “To have that common identity with the peer outreach guys really helped put my mind at ease.”

Now part of the veteran outreach peer counselor team, Dionne sees his role as “to demonstrate that this is absolutely something you can do.”

Matthew Garcia ’25, who served as an orthopedic and surgical assistant at the Naval Hospital Guam, had doubts about getting into a selective school. He gained the confidence to apply after he, too, received a call from Kay, seemingly out of the blue.

“He told me, ‘Even though you may feel like you haven’t done a lot, you’ve sacrificed years of your life to serve other people,’” said Garcia, a biology and society major in A&S and a veteran peer outreach counselor. “Knowing that there was a veteran community that wanted to support me — and not only support me, but encourage me – that call got me pretty keenly thinking about Cornell.”

The veteran outreach peer counselors say they appreciate the opportunity to give back to fellow veterans, providing the same kind of advice and encouragement that made a Cornell education feel attainable to them.

“The biggest thing that we’ll continue to do is just keep breaking those barriers of entry,” Hernandez said. “I want other veterans to know that there is a home here at Cornell, that it’s a welcoming place for the veteran community.”

On Nov. 11, the Cornell community will celebrate Veterans Day with events including a guided walking tour of veterans memorials; a talk on the continuation of service by Mark Minton ’23, president of the Cornell Undergraduate Veterans Association; and a military appreciation luncheon in Barton Hall.

Linda Copman, a writer for Alumni Affairs and Development, contributed to this story. 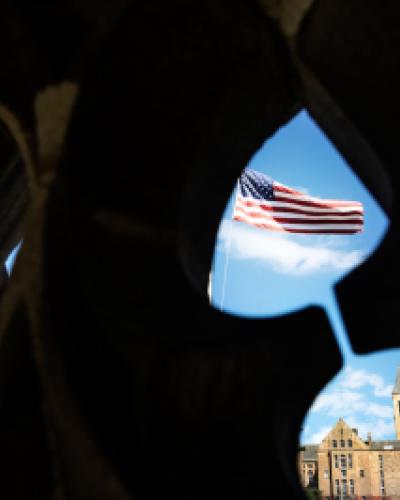 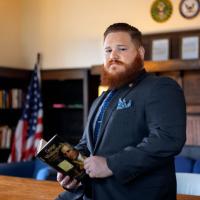