While United Nations peacekeepers are viewed by many as good Samaritans helping countries struggling in times of conflict, there are a number of cases of sexual exploitation and abuse of children that have come to light since the U.N. started opening records to the public in 2015.

Vanessa Navarro Rodriguez ’19, a government major, has been conducting research on these violations by U.N. peacekeepers and was invited to present her work at the Emerging Scholars Conference at the University of Michigan Nov. 8-10.

The Emerging Scholars Conference enables undergraduate students in the social sciences to present their work in front of other students and faculty from different universities. The University of Michigan invited 10 pairs of undergraduates and their faculty mentors to Ann Arbor for the two-night event. Rodriguez attended the conference with Sabrina Karim, assistant professor of government.

“In my senior thesis I theorize on host-country level factors and contributing country level factors that make specific kinds of SEA (sexual exploitation and abuse) more likely in some missions,” Rodriguez said. U.N. peacekeepers provide security and support to help countries with conflict to transition to peace.

With the guidance of her faculty mentor and Angie Torres, a first year graduate student, Rodriguez has constructed a new database to explore and understand the variations in type of abuse.

“I have been able to conduct this research because since 2015, the United Nations became more transparent with reports of SEA,” Rodriguez said.  “I have been fortunate to find wonderful academic mentors at Cornell like Professor Karim, Professor (Jamila) Michener, and Professor (Alexander) Livingston, who are all in the department.”

During the conference, scholars were hosted by current graduate students and received advice on applying to graduate school. Rodriguez, who graduates in December, hopes to pursue a Ph.D in political science.

“My dream is to become an academic,” Rodriguez said.

Yvette Lisa Ndlovu is a communications assistant for the College of Arts & Sciences. 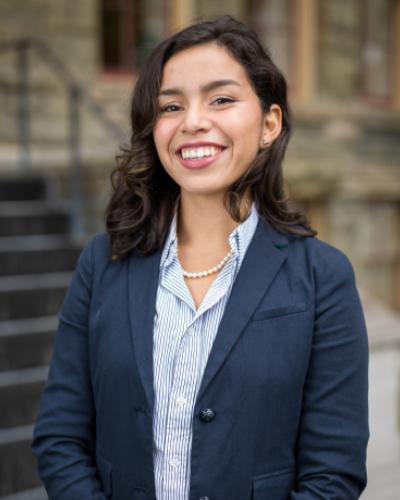