Ban on Nigeria rogue police unit may not end abuses

Authorities in Nigeria disbanded a controversial police unit following nationwide protests to end police brutality. The Special Anti-Robbery Squad (SARS) had been linked to several recent cases of kidnapping, murder and extortion that fueled citizens’ outcry over its tactics and government protection.

Sabrina Karim, assistant professor of government at Cornell University, studies police and peacekeeping in post-conflict states with a focus on sub-Saharan Africa. She has worked on post-conflict policing in Liberia, and is currently working on a book manuscript entitled, When Peace Makes States: How International Security Sector Assistance Shapes Post-Conflict State Building.

“The sustained campaign to abolish the Special Anti-Robbery Squad (SARS), which was formed in 1992 to tackle robbery using plain clothes officers and unmarked vehicles, received a win with the announcement. However, there are no signs that anyone who served on the unit will be prosecuted for crimes they committed, nor does it seem that they will be removed from the police force. This means that the police officers who were engaged in abuse within the unit will still operate within the force.

“The #EndSARS campaign in Nigeria has been going on for years and has been supported by the tech industry as well as famous athletes. Yet, similar to the public outcry after the George Floyd murder in the U.S., the videotaped killing of a Nigerian man by a member of SARS triggered nationwide protests, as well as global ones. The Nigerian government could not ignore the massive outcry against SARS. The success of the movement demonstrates that the government is willing to make major reforms to policing when pushed to do so.

“While the abolishing of the SARS is a step forward for preventing police abuse in Nigeria and a win for the activists, Nigerian policing, like any other police force that has its origins from suppression – in this case, the enforcement of colonial rule – likely needs a major overhaul to ensure that the police do not abuse the population. Policing in Nigeria have undergone years of reforms in the past and have received millions of dollars of international aid to undergo reforms. Yet, police abuse persists.  At the same time, the abolishing of the SARS demonstrates that major reforms are possible when there is political pressure.” 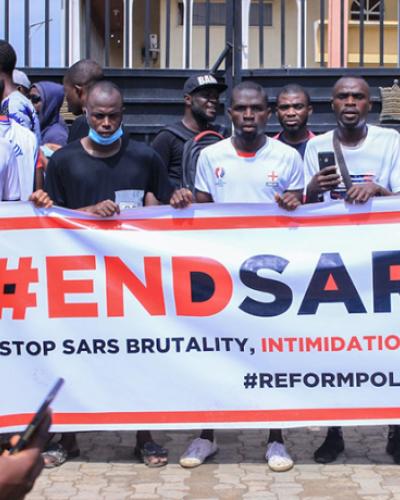