When armed white militia members stormed Michigan’s state capitol in May, they were treated as peaceful protestors of a coronavirus stay-at-home order. Yet reports of excessive violence against Black Americans – including the police killings of George Floyd in Minneapolis and Breonna Taylor in Louisville – have become almost routine.

The incidents highlight stark differences in the policing of white and Black people in the United States, according to Sabrina Karim, the Hardis Family Assistant Professor of Government in the College of Arts and Sciences (A&S).

“There’s a complete mismatch between who’s getting protected and how, as well as what constitutes a threat,” Karim said. “That is the heart of what institutional racism really is.”

Karim was one of four Cornell experts who discussed policing and incarceration during a Sept. 16 webinar that opened A&S' yearlong “Racism in America” series, which will explore research-based discoveries and potential solutions for combating systemic racism and improving equity. More than 2,000 viewers joined the webinar.

Discussions about racism can feel awkward and impolite, said Noliwe Rooks, the W.E.B. Du Bois Professor of Literature and director of the American Studies Program, the co-host of the series that is supported by Alumni Affairs and Development, eCornell and Diversity Alumni Programs.

“For too many, racism is something to be denounced but not discussed,” Rooks said in introducing the series’ debut webinar, presented in partnership with Cornell Law School. “Our moderator and panelists know if it’s not discussed, it can’t be understood.”

Marc Lacey ’87, national editor for The New York Times and A&S’ inaugural Distinguished Visiting Journalist, moderated the discussion that he said would offer a behind-the-headlines look at a topic “impossible to ignore” since Floyd’s killing sparked nationwide protests.

In addition to Karim, panelists were Peter Enns, associate professor of government; Anna Haskins, assistant professor of sociology; and Joseph Margulies, professor of law and government, all from A&S.

They discussed the racist roots of American policing that originated with slave patrols in the South and efforts to control communities of color or immigrants in the North. Whites’ longstanding automatic association of crime with Black people, Margulies said, has led to “institutional inequities that we see at virtually every stage of the criminal justice system.”

Those inequities are not limited to individuals involved with police and prisons, Haskins said, but ripple through families, schools and communities.
“Imprisonment in one generation can affect the educational outcomes and the academic trajectories in the next, creating these vicious cycles of inequality that span generations,” she said.

Despite those realities, Enns, who’s also executive director of the Roper Center for Public Opinion Research, noted that public attitudes have become less punitive since the mid-1990s as crime rates have dropped.

“The U.S. was not always the world’s leader in incarceration,” he said. “These shifts happen, and we’re at a moment that the data suggest another shift … It’s an important moment to try to realize major (criminal justice) reforms.”

Asked what single reform should be implemented, Enns said there should be bipartisan support to tie police budgets more directly to accountability, citing failures to monitor the acquisition and use of surplus military equipment as a seemingly uncontroversial example of the need for scrutiny. Margulies called for an end to saturation policing strategies such as “stop and frisk” that he said have proven counterproductive.

Haskins pointed to a need for holistic solutions that recognize how criminal justice policies are linked with schools, housing and social welfare institutions. Karim suggested improvements in how officers are recruited and trained to change police cultures.

But Karim, whose research focuses on comparative and international policing, said U.S. police reform efforts broadly – from community policing to de-escalation training to banning choke holds – have failed to eradicate abuses. Amid calls by some in the U.S. to “defund” or “abolish” police forces, she noted that nations approach policing in a variety of ways. Some European police forces are lightly armed or unarmed, and numerous countries have disbanded and re-created forces following major conflicts.

“It’s not unprecedented to start anew,” she said.

Margulies agreed that entire police departments may need to be overhauled to root out cultures of excessive force, but noted that residents of high-crime neighborhoods often oppose abolishing police.

Police unions that promote “warrior” cultures and the decentralized nature of American policing – there are more than 18,000 local departments – were identified as obstacles to reform. But the panelists closed with optimistic notes about the potential for constructive changes.

Enns said the nation should think not only about removing police funding but how to rebuild systems that may warrant significantly more total funding, for mental health and other social services. “Ultimately, we’re talking about people’s lives,” he said.

Haskins said holistic reforms must take structural racism “head on.” Karim said calls to reimagine the police seek to reduce the burden society has placed on officers, who are asked to respond to virtually every community problem. And Margulies cautioned the public not to see entrenched problems as permanent.

The Racism in America series will resume in November with a focus on residential and educational segregation. Webinars planned next spring will discuss protest movements and civil disobedience; health care inequalities; and race and the economy. 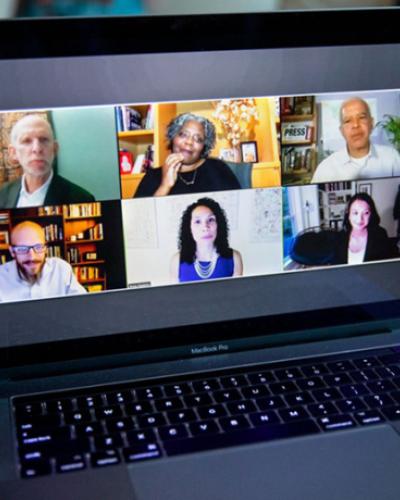