Misperceptions of marginalized and disadvantaged communities’ level of concern regarding COVID-19, as well as other issues such as climate change, constitutes a form of social misinformation that may undermine cooperation and trust needed to address collective problems, according to new Cornell-led research.

“If we misperceive who is most concerned about pressing threats like COVID or climate change, we might fail to engage the communities that are being most impacted,” said Jonathon Schuldt, associate professor in the Department of Communication in the College of Agriculture and Life Sciences.

“And science itself may suffer in a number of ways,” he said, “if the groups that are most affected and most concerned about these issues are underrepresented in science and policy circles.”

Schuldt, the interim executive director of the Roper Center for Public Opinion Research, is corresponding author of “Inequality and Misperceptions of Group Concerns Threaten the Integrity and Societal Impact of Science,” which published May 5 in Annals of the American Academy of Political and Social Science.

This research – appearing in a special issue of the journal dedicated to threats to science – built off previous published work from Schuldt and Pearson that addressed misperceptions of climate change concerns among different groups.

“That’s an important piece of this,” Schuldt said, “because what we found in our past work was this paradox: Minority and lower-income respondents reported the highest levels of climate change concern, but the American public misperceived them as among the least concerned.”

For this newer work, Schuldt and his team analyzed more than 1 million responses from mid-February to late August 2020, from both national polling and their own original surveys on pandemic risk perceptions and social biases.

“We have made all the data available at the Roper Center for Public Opinion Research,” said Enns, the Roper Center’s executive director, “so other researchers can continue to analyze and learn from this massive collection of COVID-related survey data.”

Previous research found that compared to white people in the U.S., racial and ethnic minorities express more concern about COVID-19. This finding held for Schuldt’s research: Group differences in concern were moderate in the first three months of the pandemic, but by August, Asian, Hispanic and Black respondents were approximately twice as likely to report being “very worried” (the highest concern level) as white respondents or other groups.

Analysis of a separate dataset of more than 31,000 respondents interviewed by online polling company Civiqs, from March 2020 to March 2021, revealed a similar racial and ethnic disparity.

But in gauging the public’s perception of groups’ levels of concern, the researchers saw divergence from the previous work. Between June and October 2020, they polled around 4,200 respondents from the AmeriSpeak panel, maintained by NORC at the University of Chicago, and found that while underestimation of groups’ concern was evident, it was not as strong as with climate change.

Notably, Hispanics/Latino, Black and Asian people in the U.S. were perceived as significantly more concerned about the coronavirus than white people in the U.S., contrary to what was observed in the environmental context. Part of the concern among Asian respondents, the paper suggests, may reflect the violence and prejudice they have endured during the pandemic.

“I think this work teaches us that you have to study perceptions of group concerns issue by issue,” Schuldt said. “It’s not the case that the public thinks minority and lower-income communities care less about any issue. For COVID but not climate change, the public recognizes that the most affected groups are more concerned, but in some cases, they still underestimate those concerns.”

Lewis echoed Schuldt’s point about the importance of studying these nuances.

“The structure of our society shapes the experiences that people have in their day-to-day lives, and those experiences matter for our perceptions,” Lewis said. “Some of the experiences that disproportionately affect marginalized communities are more visible than others, so the public is more likely to recognize them.”

One difference between climate change and COVID is people’s acceptance of each issue: Some groups refuse to believe that human-caused climate change is real, while millions of deaths around the world have led all but the most fringe-level conspiracy theorists to conclude that the coronavirus exists.

“There seems to be more discussion and news coverage of the unequal impacts of COVID compared to climate change,” Schuldt said. “And so we think that it might partially be driven by media coverage; it’s just talked about a lot more.”

The work was supported by a grant to Schuldt and Enns from the National Science Foundation. 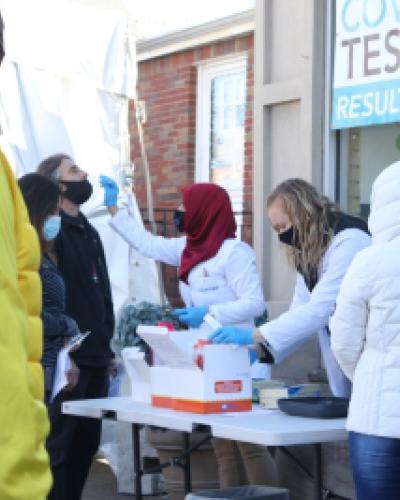