There was broad public support for increasing the federal minimum wage, which had stagnated for decades, when a Democratic congressman urged action during a brief floor speech in July 1999.

But while achieving that goal would take another eight years, members of both parties then were hard at work advancing an economic policy that few average Americans had demanded or understood: the deregulation of financial services, through a dismantling of laws in place since the Great Depression.

Lawmakers’ attention to corporate and wealthy interests, even as income inequality was widening to historic levels, was hardly unusual, Peter K. Enns, professor of government in the College of Arts and Sciences, and three co-authors write in a new book, “Hijacking the Agenda: Economic Power and Political Influence,” published June 30.

Those groups wield advantages in two key forms of power, they argue: structural, reflecting one’s place in the economy, and “kinetic,” the ability to mobilize resources such as campaign contributions, public relations campaigns or protests.

“The result is that economic concerns of wealthy interests are prioritized,” the authors write, “while the concerns of lower-income and middle-class Americans are often ignored.”

To explain why and how that happens, “Hijacking the Agenda” examines how issues get on – or are kept off – the national policy agenda, starting long before bills are drafted and voted on. That process can be observed and measured, the authors suggest, by tracking the issues members of Congress talk about and promote.

“Studying votes and outcomes may in many ways be too late in the process,” Enns said. “We’ve got to look at the agenda – what’s being said, what’s being proposed, what’s being debated – and not just at what policies are passed.”

The book combines in-depth case studies with big-data analysis of more than 20 years of floor speeches by members of Congress on economic issues – more than 500 million words – linked to records of campaign contributions.

The analysis of congressional speech from 1995 to 2016 found that legislators who received more support from corporate and wealthy sources discussed pro-business priorities more; those receiving more support from organized labor devoted more attention to workers’ issues. But corporate contributions dwarfed those from unions, and the analysis found that several terms associated with the affluent – “depreciation,” “dividend” and portfolio” – each were spoken far more often than a set of 70 terms related to inequality.

“These patterns are stunning,” the authors write. “Members of Congress talked a lot more about business and corporations than they did workers and labor – more than twice as much, in fact.”

The imbalance reflects the greater structural power business and the affluent hold inherently in a capitalist economy, according to the authors, including elected officials’ common belief that what’s good for business will be good for the entire economy. Individuals or organizations with structural power typically also can deploy more kinetic power – though importantly, Enns said, exceptions are possible.

A case study details how a multiyear push for financial deregulation – a major policy change not driven by public opinion – became a fait accompli in 1999 when the banking, financial services and insurance industries united, amplifying their structural power. Opposition from consumer advocates was comparatively weak and fragmented, though their fears about banks becoming “too big to fail” would prove accurate less than a decade later.

Financial firms’ effective exercise of kinetic power included campaign contributions strategically timed in advance of critical committee hearings and negotiations, the analysis showed. Donations went to leaders shaping the legislation in both parties, and to members who opposed to the bill – but remained silent.

“While some scholars dismiss the conventional wisdom that campaign contributions undermine the influence of average Americans,” the authors write, “our analysis confirms that this is in fact the case.”

In contrast, with union influence on the decline and Democrats increasingly relying upon financial sector support, the minimum wage received scant attention on the congressional agenda despite its popular appeal.

However, “Hijacking the Agenda” also describes conditions under which less powerful interests or a social movement can overcome structural and kinetic disadvantages to advance policy goals. From the 2007-08 financial meltdown to the police killing of George Floyd last year, crises can – at least temporarily – disrupt the status quo. And longer-term changes in the economy shift who holds structural power, as seen in the rise of Big Tech.

The authors’ focus on the interplay between structural and kinetic power is useful for understanding history, Enns said, and how average Americans might try to claim a bigger place on the policy agenda.

“Just because the system has these inequities built into it doesn’t mean individual or collective efforts are always destined to fail,” Enns said. “It may be really difficult, and it may work less often than we would want, but there is a path forward.”

In addition to Enns, the book’s co-authors are Christopher Witko, professor of public policy at Penn State University, and Nathan J. Kelly and Jana Morgan, both professors of political science at the University of Tennessee.

Enns’ previous books include “Incarceration Nation: How the United States Became the Most Punitive Democracy in the World” and “Who Gets Represented?” 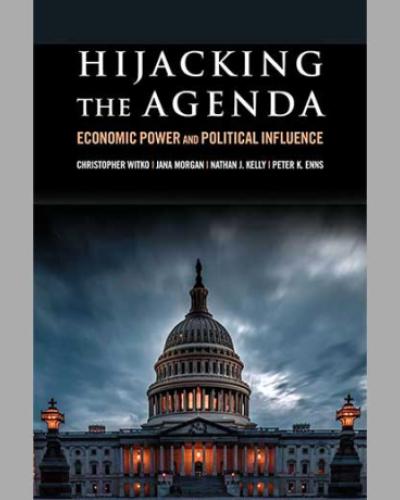