With voting to select this year’s presidential nominees in full swing, the Roper Center for Public Opinion Research at Cornell has launched a series of initiatives to help inform citizens and journalists and support the democratic process.

Their goal: to bring public opinion back to the public.

“Part of our mission is dissemination of information about public opinion from the ever-expanding Roper Center archive,” said Robert Shapiro, chair of the center’s board of directors and a government professor at Columbia University. “These polls tell us much about the voice of the people in our American democracy.”

After selecting the “America’s Voice Project” portal (featuring a logo of a red, white and blue megaphone) on a library’s online database page, citizens, educators, students, researchers with a Queens library membership can access poll questions dating back as far as 1935. The archive of opinions on topics such as government, politics, health care, technology, the environment, immigration and taxes offers a valuable historical record and context for today’s campaign and policy debates.

The Queens Public Library’s partnership demonstrates “its commitment to cultivating an informed and engaged citizenry,” said Nick Buron, the chief librarian. “Our library staff are very enthusiastic to learn about this extraordinary resource and help library users discover what others have thought about the great debates of their time.”

To further support informed communities and help combat the spread of “fake news,” the Roper Center has offered small, independent media outlets free access to its archives through the November election.
Major media outlets – including ABC News, AP, CBS, CNN and The New York Times – are already among the Roper Center’s members. But the center saw an opportunity to fulfill its mission of broadening the understanding of public opinion by supporting smaller outlets that have fewer resources.

“The Roper Center for Public Opinion Research recognizes the importance of media reporting on the public’s attitudes and preferences,” said Brett Powell, associate director. “Representative democracy requires that politicians understand public attitudes, experiences and concerns.”The center’s data can be analyzed to show how attitudes on issues have shifted over time, helping journalists analyze and communicate the deeper meaning behind more current results.

“Polls are snapshots of time, and without the information from the past, you can’t really make sense of current polling,” said Kathleen Weldon, director of data operations and communications. “We want to encourage responsible use of polling data by encouraging news reporters to look at context.”

Part of that context is a reminder, especially in a presidential election year, that public opinion encompasses much more than the “horse race” of leading candidates, said Peter Enns, Roper Center executive director, associate professor of government in the College of Arts and Sciences and co-director of the Cornell Center for Social Sciences.

Enter Roper’s 2020 Topic Tracker. The new public resource allows any site visitor to compare the frequency of polling questions on key policy issues, from abortion to trade, as well as on the presidential candidates during the 2016 and 2020 election years.

A look at immigration, for example, starts with bar graphs depicting the number of poll questions asked on that topic in 2016 and 2020. From there, users with access to the archive can click on any bar to reveal the specific questions asked, the source poll and the responses. The results show immigration has grown in significance this election cycle: 33% of respondents rated it “extremely important” in a recent poll, compared to 27% four years earlier.

“Although who is leading the polls often gets more attention,” said Enns, “it is important to understand the public’s views on specific policy questions.” 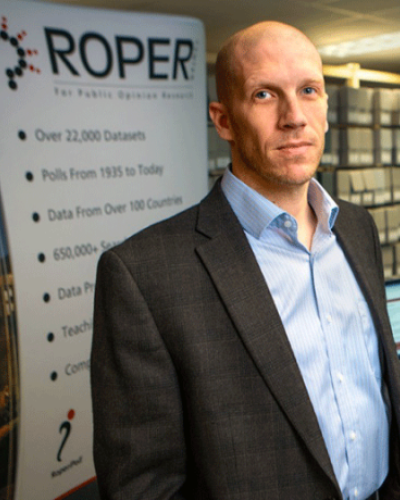 Study: Nearly half of Americans have had a family member jailed, imprisoned

Experts to discuss 2020 polling on ‘Pundits on the Line’