Sabrina Karim, assistant professor of government, has been awarded a Democratic Control of Armed Forces (DCAF) grant to assess the barriers affecting women's participation in eight selected United Nations peacekeeping troop and police contributing countries. The $294,843 award will cover a post-doc position for 18 months, a research assistant, and time for Karim to conduct the study.

The project is jointly funded by the Governments of Canada and Norway and is part of Canada’s 5-year Elsie Initiative for Women in Peace Operations that aims to increase the number of women in United Nations peace operations. Karim’s project will help DCAF create evidence-based policy and programmatic recommendations to reduce barriers to uniformed women's deployment.

In collaboration with DCAF, Karim will develop a comprehensive framework for assessing these barriers and, together with local research partners in the eight selected countries, apply the methodology to the armed-forces and police forces of these countries. The barrier assessment methodology will be made publicly available, for use by any country to better understand the barriers to uniformed women's participation in peacekeeping.

Karim is the author of the prize-winning “Equal Opportunity Peacekeeping: Women, Peace, and Security in Post-Conflict States” (Oxford University Press), co-written with Kyle Beardsley. Her current research focuses on three themes: assessing the impact of international involvement in security assistance to post-conflict states; understanding trends in post-conflict sexual violence; and exploring the relationship between gender norms and political violence.

DCAF, headquartered in Geneva, Switzerland, is a non-profit international foundation dedicated to improving the security of states and people within a framework of democratic governance, the rule of law and respect for human rights. 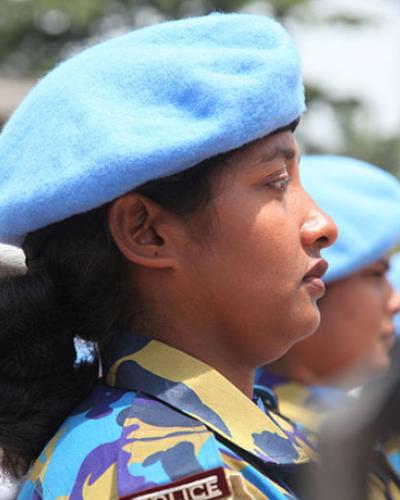