After times of major conflict, such as the civil wars in Liberia from 1980 to 2003, peace often leaves a power vacuum, especially in remote areas not yet reached by a developing government.

“In areas of limited statehood, a country’s central authority lacks the ability to implement and enforce rules and decisions,” Sabrina Karim, assistant professor of government, wrote in new research published in the American Political Science Review.

The paper, “Relational State Building in Areas of Limited Statehood: Experimental Evidence on the Attitudes of the Police,” is based on Karim’s research in Liberia. She finds that personal contact between police officers and citizens encourages a positive attitude about the country’s central authority because such relationships provide information and facilitate social bonds.

The state earns legitimacy when the public accepts state authority over other sources of authority, including traditional chiefs, criminal groups or external forces such as United Nations peacekeepers.

“As the state expands its enforcement capacity, and as individuals have positive experiences with new state agency personnel, citizens’ attitudes toward state authority may change,” Karim wrote.

To reach this conclusion, Karim coordinated a study with the Liberian National Police (LNP) to test whether household visits from a pair of police officers – either two male or two female – improved residents’ attitudes toward police. Her study also measured whether police officers’ gender influenced citizens’ acceptance of them.

Building on relationships she’s established in Liberia through years of work in the country, Karim collaborated with the LNP to conduct outreach into a rural area, Grand Kru County, as a part of the LNP’s community policing expansion.

As the state expands its enforcement capacity, and as individuals have positive experiences with new state agency personnel, citizens’ attitudes toward state authority may change. —Sabrina Karim

She prepared four Liberian police officers – teams of two females and two males – to go door to door in randomly selected villages, accompanied by Liberian enumerators. Both teams paid visits of 20-30 minutes each to 375 households; at the end of each visit, officers left a card with the police phone number.

Three weeks later, the 750 households were surveyed about a variety of topics, including perceptions of police. A third set of households, a control group, received no police visits.

The data showed that visits increased citizens’ preferences for the police, over alternative sources of security, for a wide range of security issues.

“This could be due to social bonds created with the new state security actor,” Karim said. “If citizens did not have personal relationships with a police officer before, the visit put a face to police officers and started a process of trust in the individual police officers who visited them. It led community members to prefer those specific officers to come back and respond if there is a dispute in the community.”

There was, however, no added improvement in perceptions of the police among female residents who were visited by female police officers. Karim was surprised at this outcome, but sees it in a positive light.

Based on this study, Karim suggests that building relationships may help a new government earn legitimacy in the eyes of citizens and could help prevent violence in the future.

“The most important kinds of reforms are ones that enable trust-building in the formation of real positive relationships between different groups of people,” Karim said, “even more so in a post-conflict country because there’s a deficit of trust overall.”

This research was funded by grants from the National Science Foundation, Emory University and the Folke Bernadotte Academy 1325 Working Group. 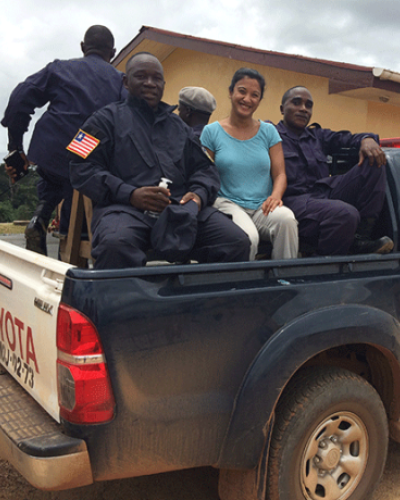